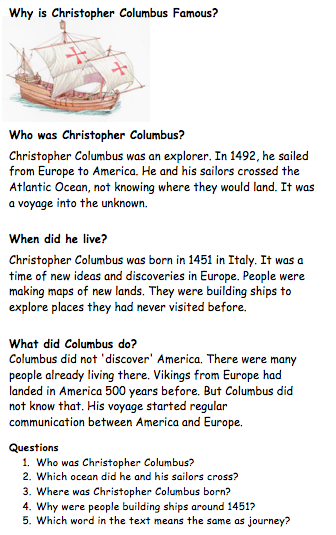 A comprehension relating to Christopher Columbus. It explores who Columbus was, when he lived and the common misconception of  ‘Discovering America’. 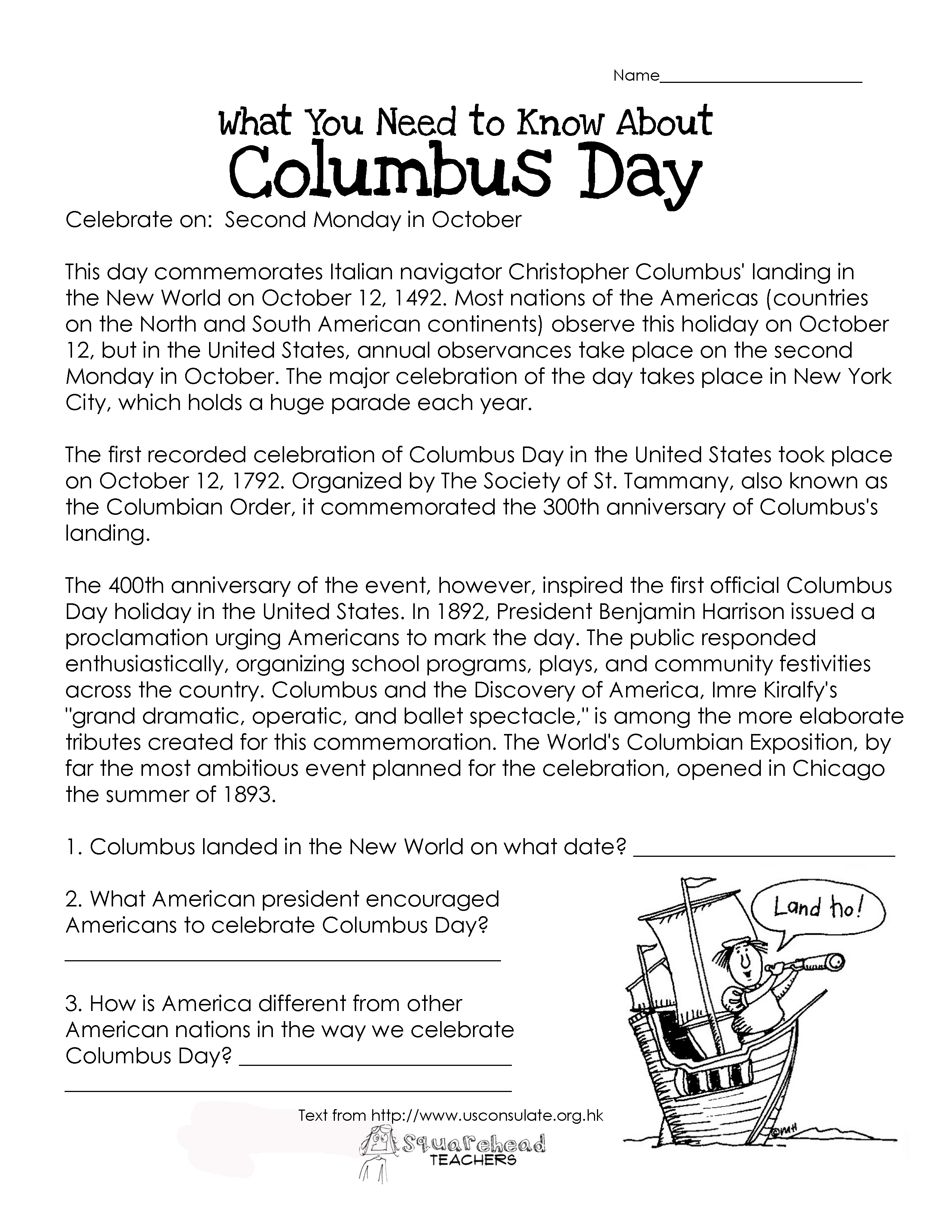 This is a comprehension worksheet about the history of Columbus Day that in celebrated in America.

Note: Look out for the American spelling of Organised.

Columbus Day, which is on the second Monday of October, remembers Christopher Columbus’ arrival to the Americas on October 12, 1492. This holiday is controversial because the European settlement in the Americas led to the demise of the history and culture of the indigenous peoples.

This is a map highlighting the journeys of Christopher Columbus. In 1492, he sailed from Europe to America. He and his sailors crossed the Atlantic Ocean, not knowing where they would land. It was a voyage into the unknown. 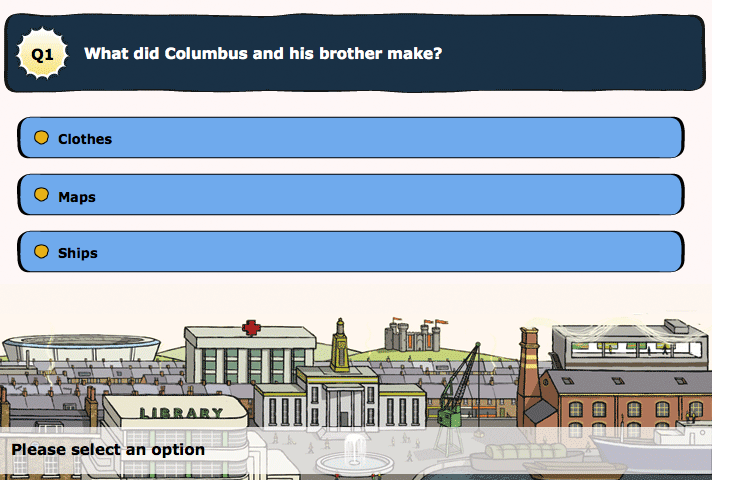 A great resource for children to put their knowledge of Christopher Columbus to the test. 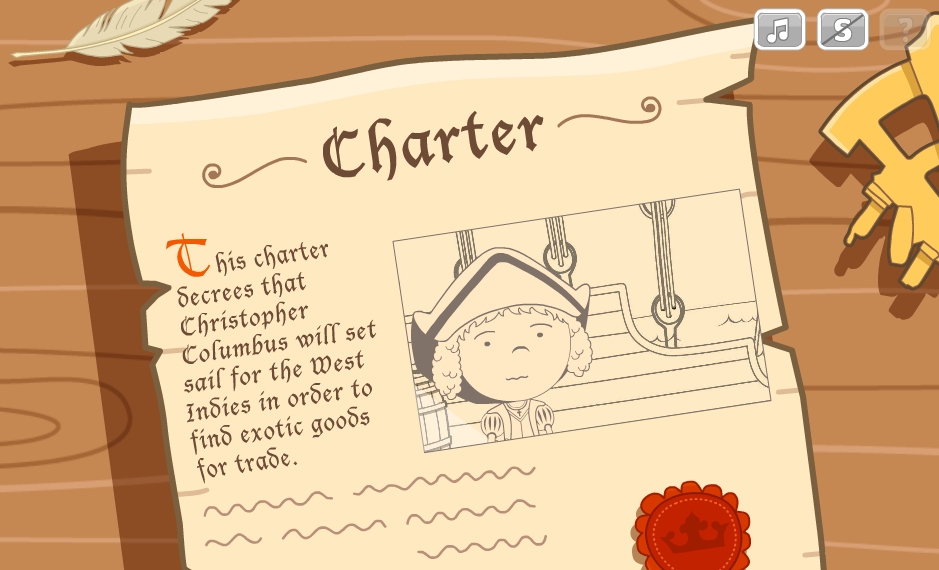 A fantastic interactive resource that shows the journey on the Santa Maria and the journey across the Atlantic. It also has activities throughout the story for the children to complete to ensure they are following the storyline. 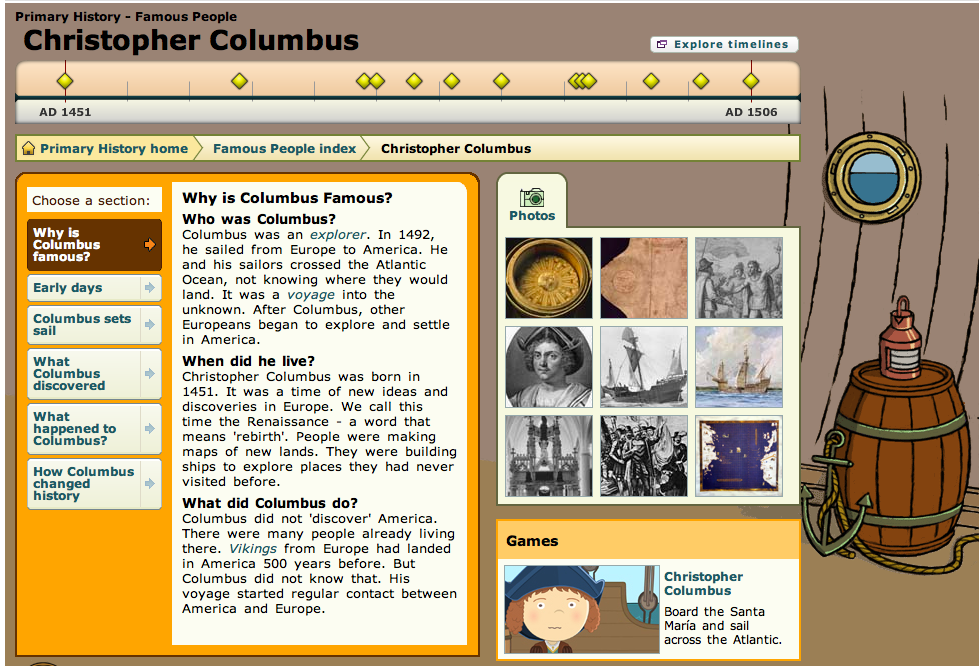 A super bank of resources that explores everything your children need to know about Columbus. The resource could be used as a referral point for the children to pick information from. 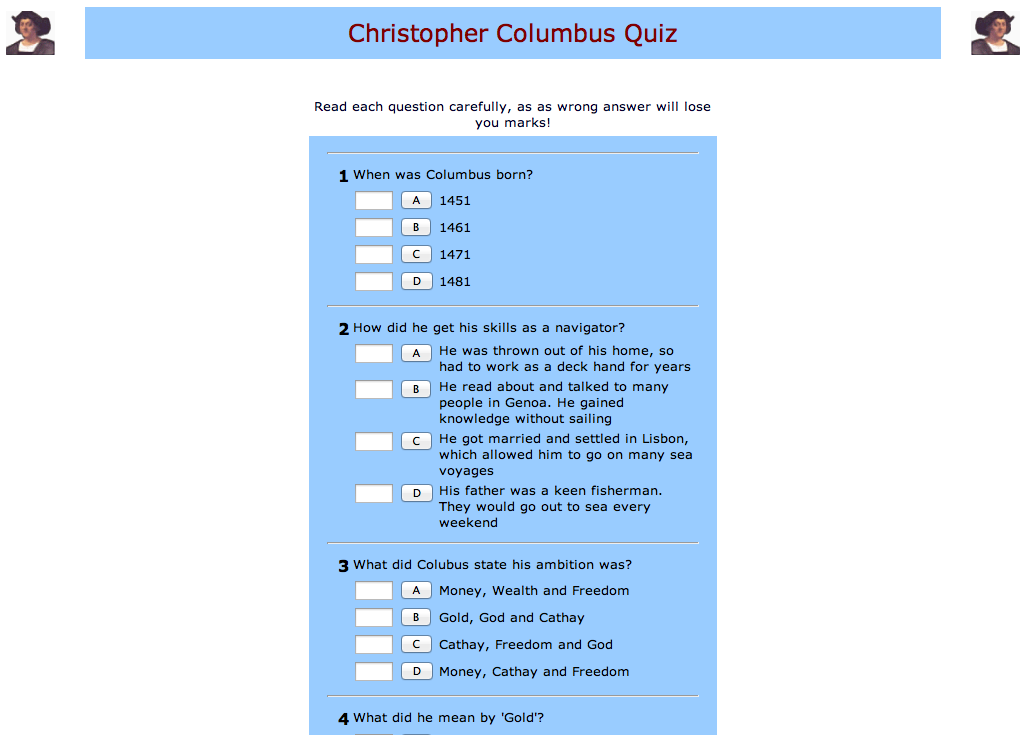 A Great quiz to test the knowledge of your children. This quiz is multiple choice and could be used as an assessment at the end of the term or as a research activity. 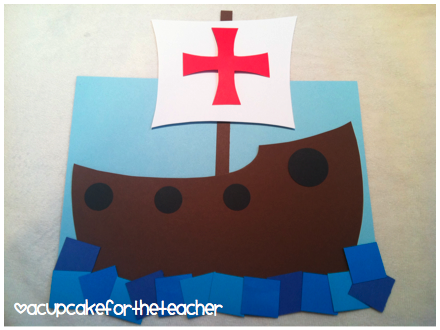 A very simple piece of artwork for your children to create. 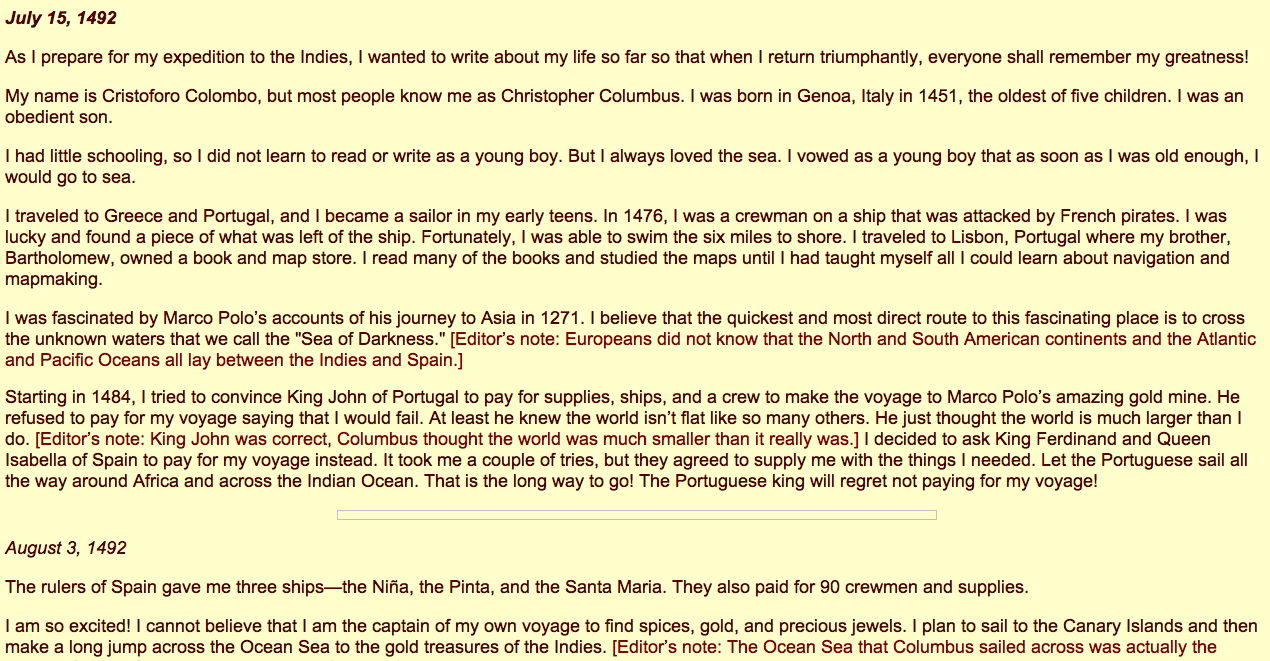 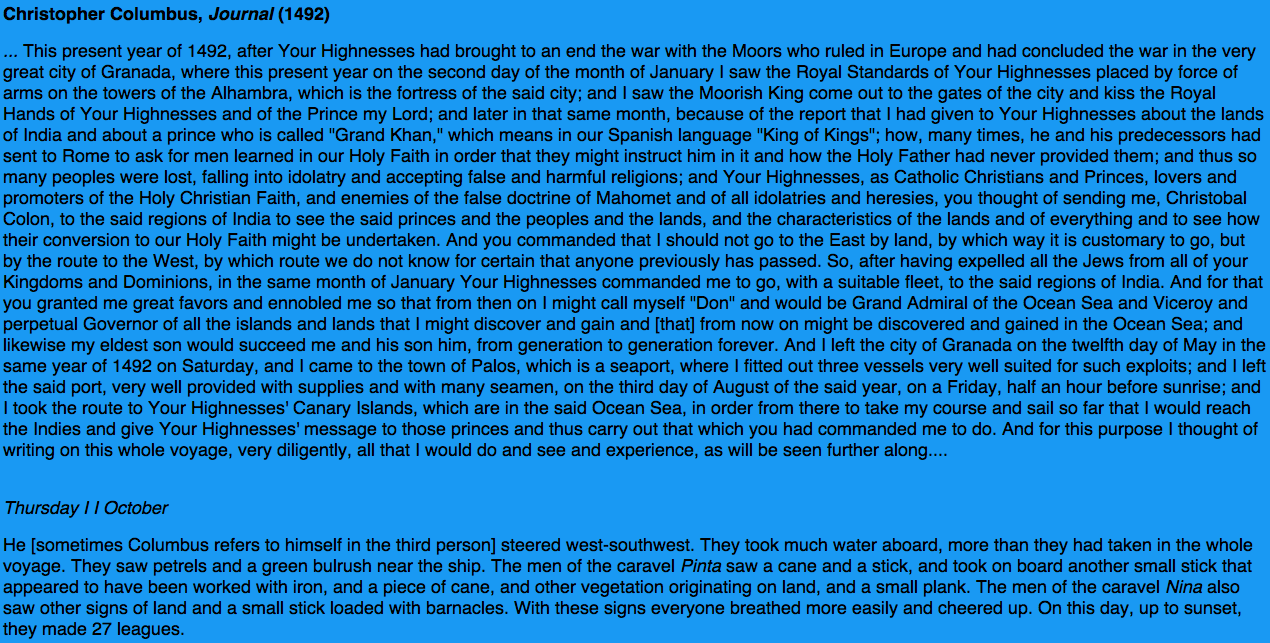 A journal entry from 1492, written by Columbus. 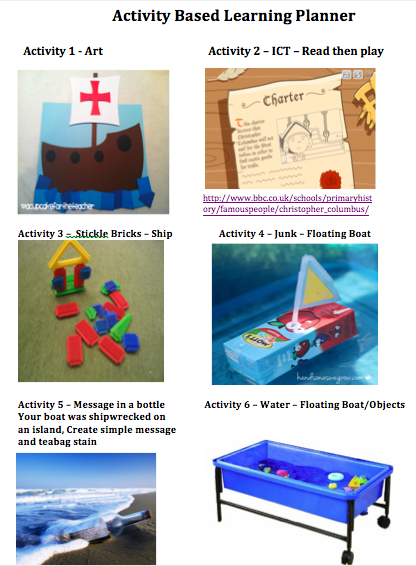 A variety of activities for activity based learning or play. 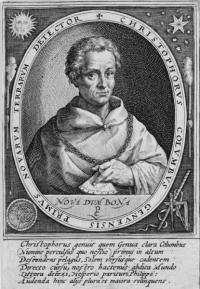 What did Columbus want to do?

In the 15th and 16th centuries, the Europeans wanted to find sea routes to the East. Columbus wanted to find a new route to the Far East, to India, China, Japan and the Spice Islands. If he could reach these lands, he would be able to bring back rich cargoes of silks and spices. Columbus knew that the world was round and realised that by sailing west, instead of east around the coast of Africa, as other explorers at the time were doing, he would still reach the East and the rich Spice Islands. 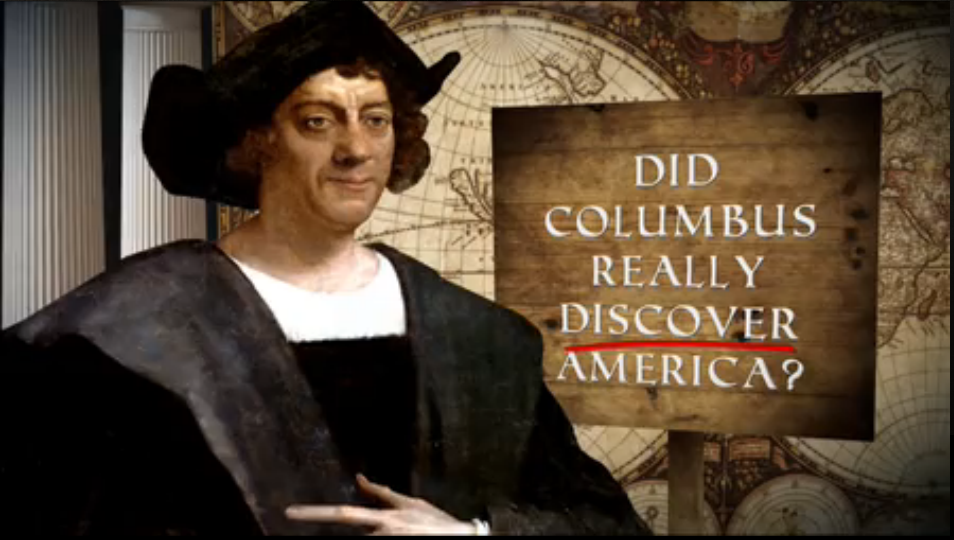 Columbus is well-known for ‘discovering’ America. This video explores the truth…

The explorer Christopher Columbus made four trips across the Atlantic Ocean from Spain: in 1492, 1493, 1498 and 1502. He was determined to find a direct water route west from Europe to Asia, but he never did. Instead, he accidentally stumbled upon the Americas. Though he did not really “discover” the New World–millions of people already lived there–his journeys marked the beginning of centuries of trans-Atlantic conquest and colonization.