In this resource pack, your class must either identify the inverted commas or add in the invented commas with or without lines to prompt.

This piece of text is based on the book Secrets of a Sun King. 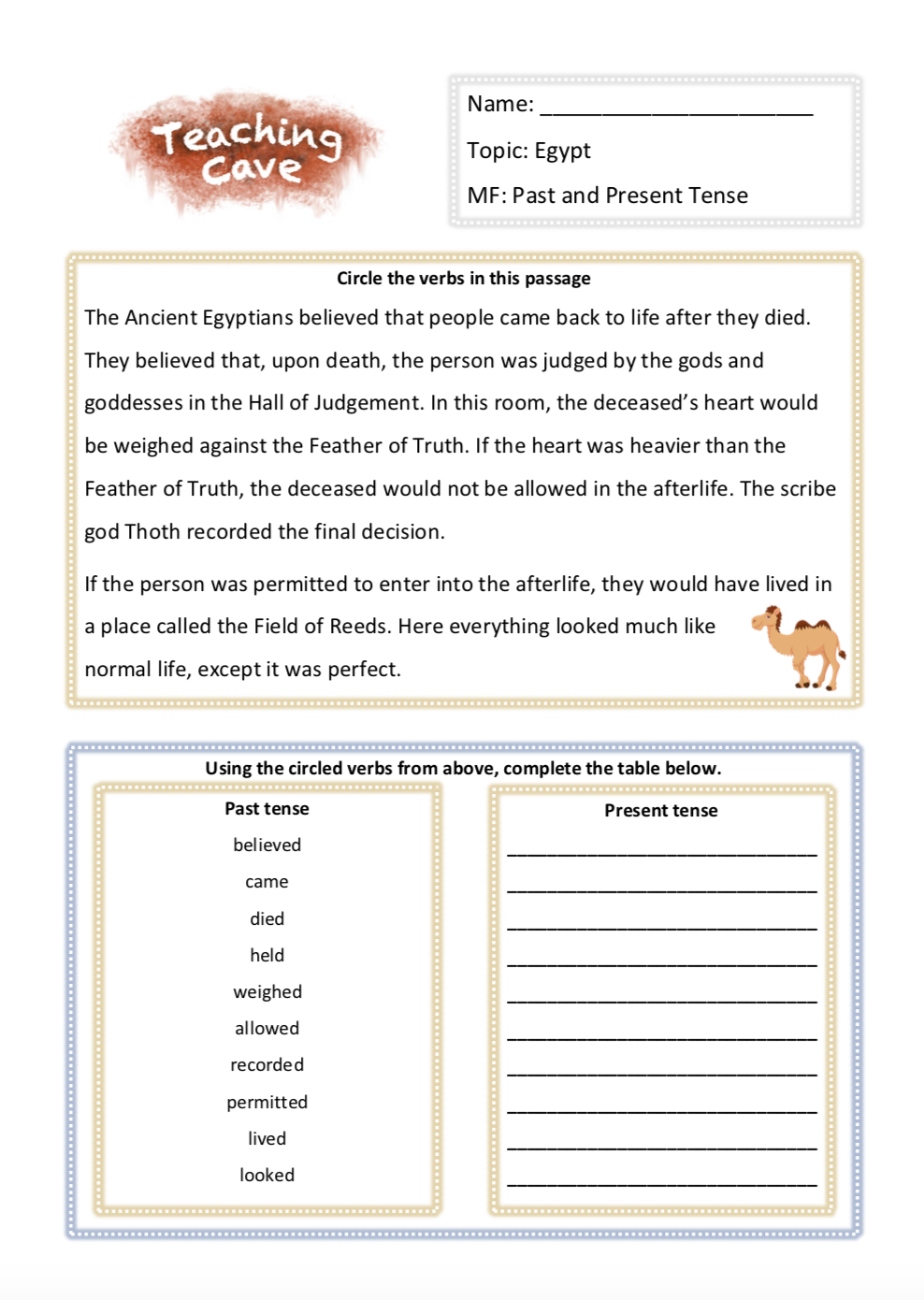 Past and Present Tense

This differentiated resource pack helps your children work on past and present tense linked to the Ancient Egypt topic.

The children must add in the verbs to complete the activity and then change the words to present tense.

This piece of text is based on the book Secrets of a Sun King. 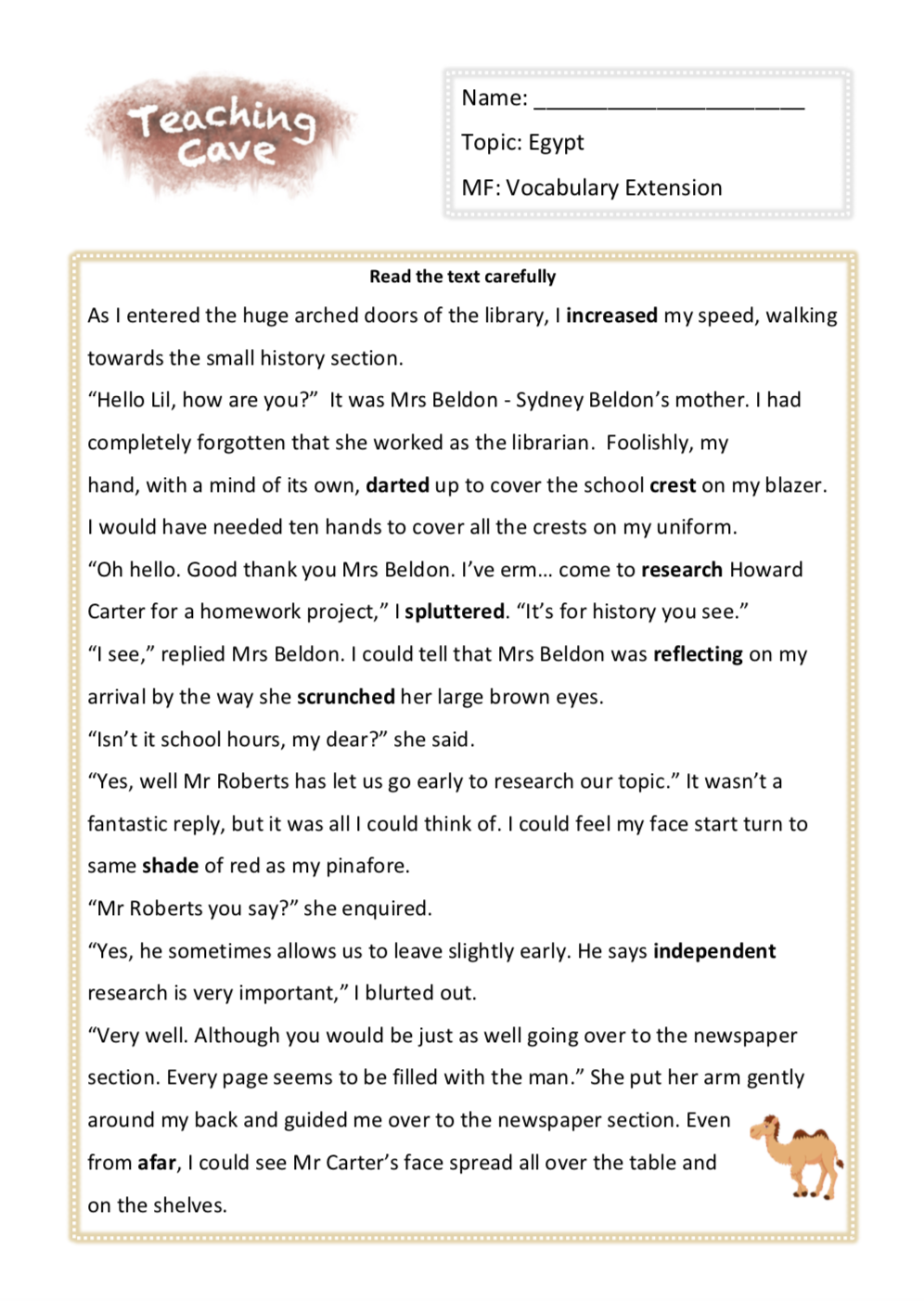 Your class will read the familiar piece of text and focus in on the vocabulary used. They must then delve deeper into the definitions.

Resources have been differentiated to cater for all children in your class. 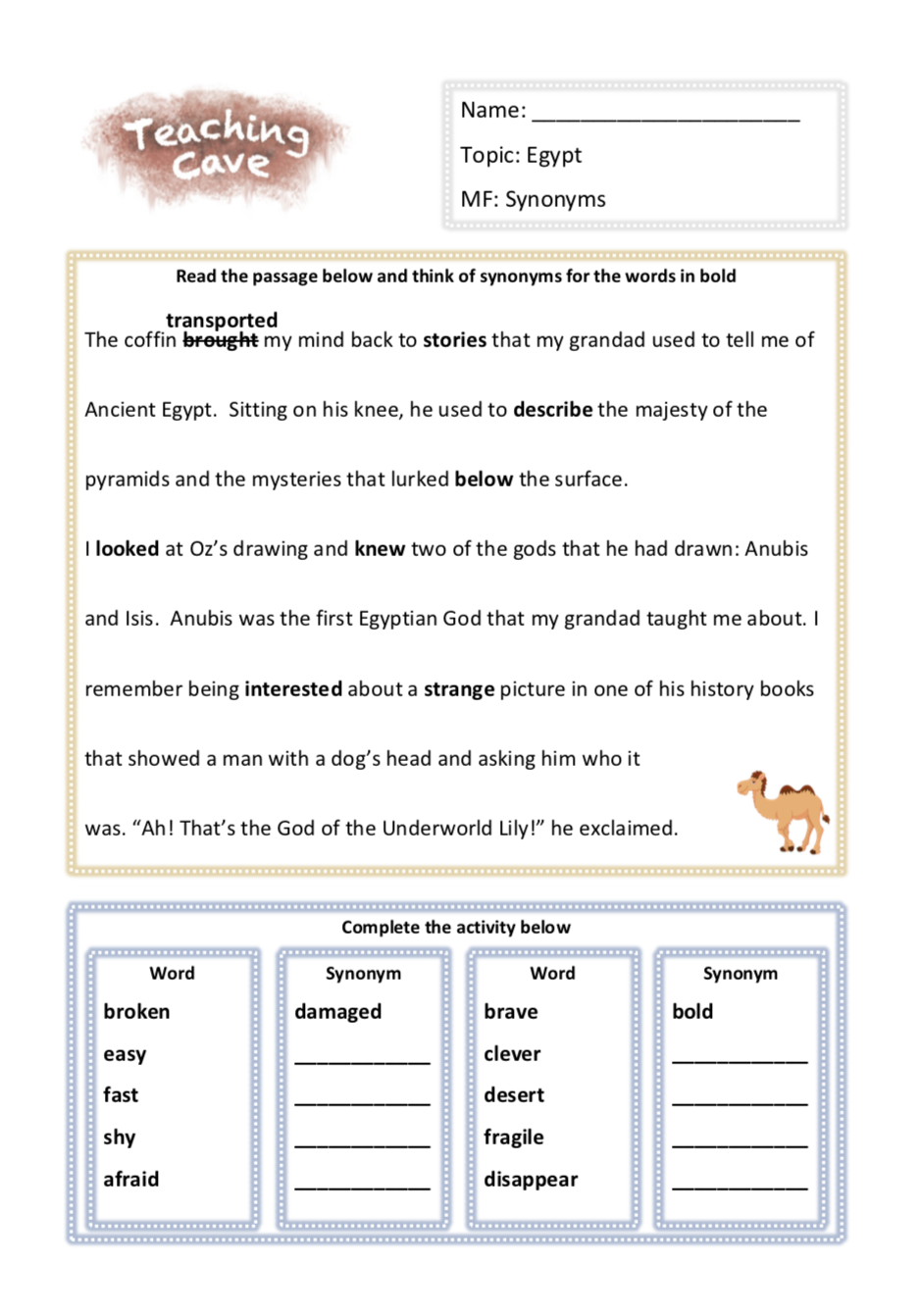 This pack encourages your children to edit the passage and think of synonyms to improve the words used. 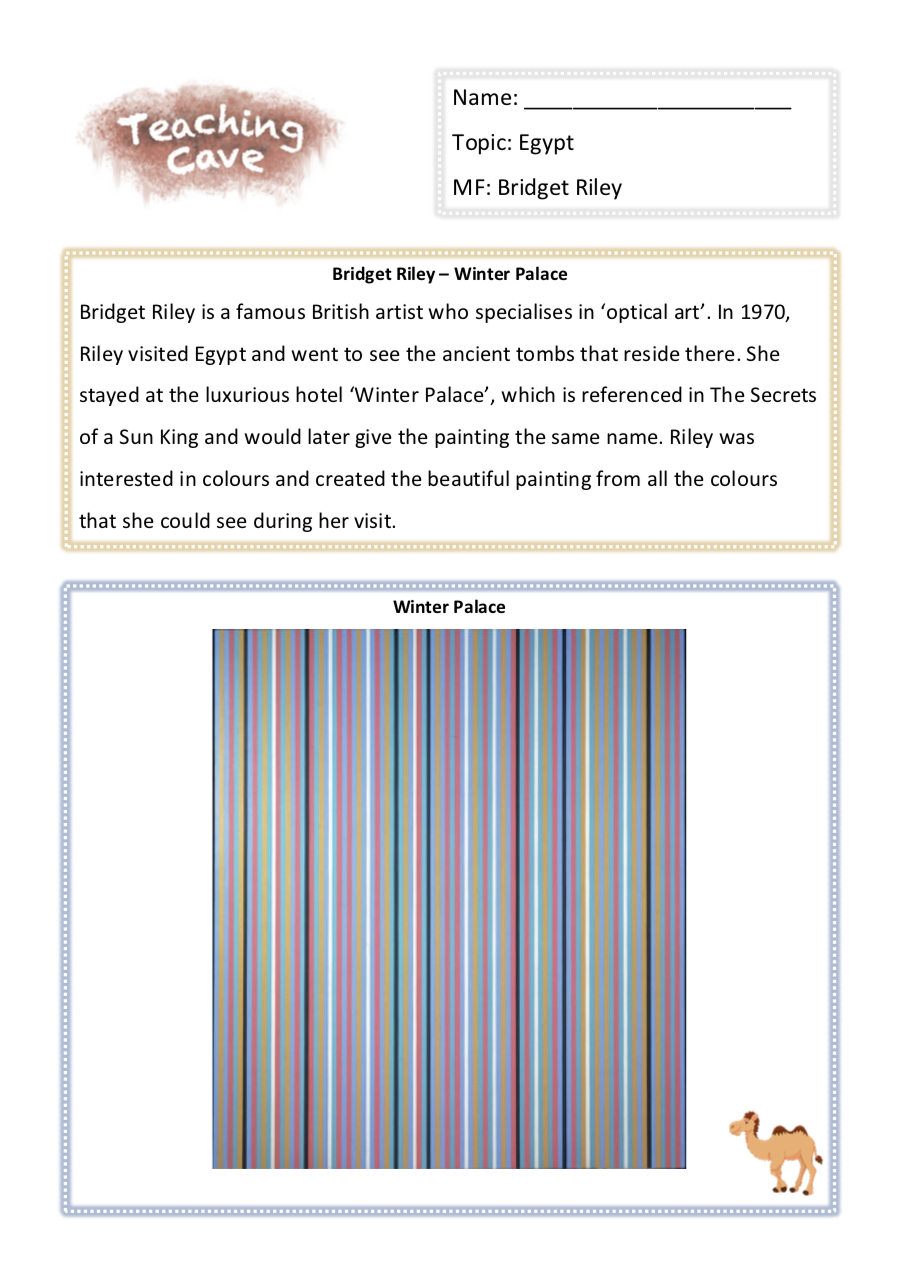 Bridget Riley is a famous British artist who specialises in ‘optical art’. In 1970, Riley visited Egypt and went to see the ancient tombs that reside there. She stayed at the luxurious hotel ‘Winter Palace’, which is referenced in The Secrets of a Sun King and would later give the painting the same name. Riley was interested in colours and created the beautiful painting from all the colours that she could see during her visit. 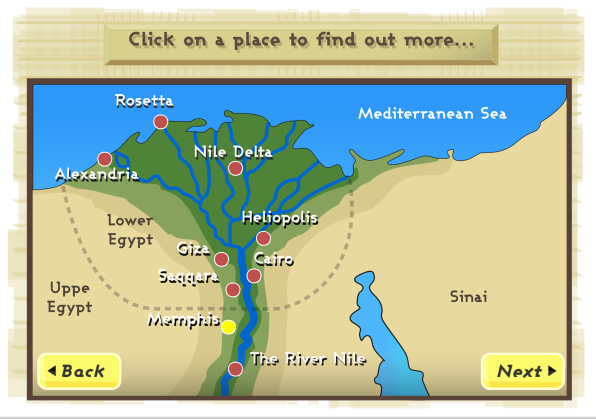 This is a wonderful resource the explores the different areas of Egypt and gives a brief description on each.

You can also take a quiz to test the children’s knowledge.

Egypt is one of 53 countries (including islands) in the continent Africa.  Egypt is the the northeast of the continent and the people, known as Egyptians, are often regarded as one of the greatest civilisations from the past.

Egypt is home to the Sahara desert. The Sahara is the world’s largest, non-polar desert. When most people think of a desert they imagine a landscape covered with sand and sand dunes. Although many deserts are sand-covered, most are not. Many desert landscapes are rocky surfaces. They are rocky because any sand-size or smaller particles on the surface are quickly blown away. It is estimated that, overall, the Sahara is just 30 percent sand and 70 percent gravel.

During the day the Sahara reaches blistering temperatures, but at nighttime the temperatures drop below freezing.

To learn more about the Sahara click the image. 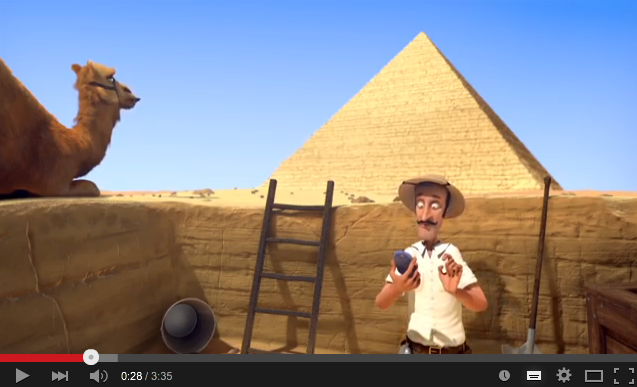 A brilliant animation that allows your KS1 or Ks2 class to get into the mind of an archaeologist who is about to uncover the secrets of the pyramids. 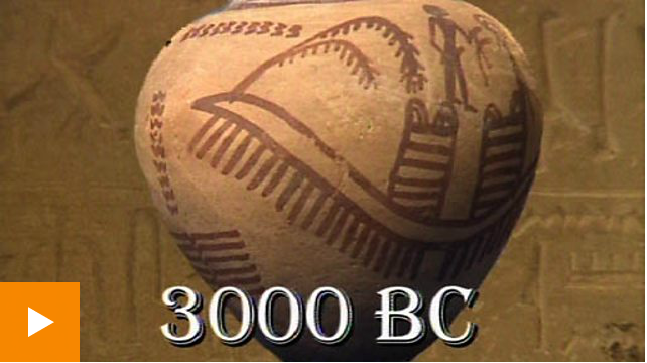 The clip could be used as a spark for discussion on how evidence is used and what we are able to deduce from single pieces of evidence, compared to what we could get from multiple artefacts.

This is a great introduction when looking at sources linked to Ancient Egypt. 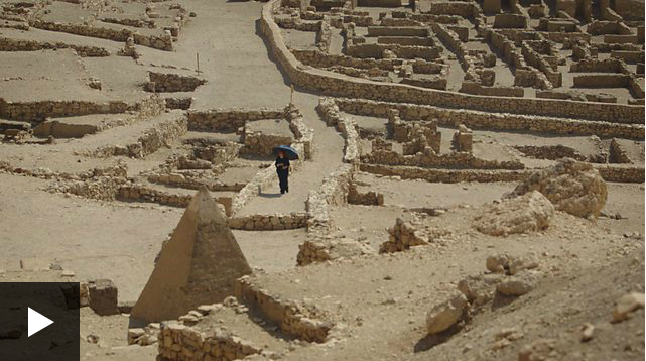 Dr Joann Fletcher visits the village of Pa-Demi to discover more about the daily lives and tombs of Kha and Merit. She looks at their mummies in the Turin museum to discover more about their clothes, food and furniture. Jo then visits excavated homes in the village to explain what rooms the typical house would have and how they would have been used. The clip shows how to make Egyptian bread and also the other fruits that would have been a main diet for them. Joann then discovers the importance of the River Nile to the villagers and also the system they had for the toilet. 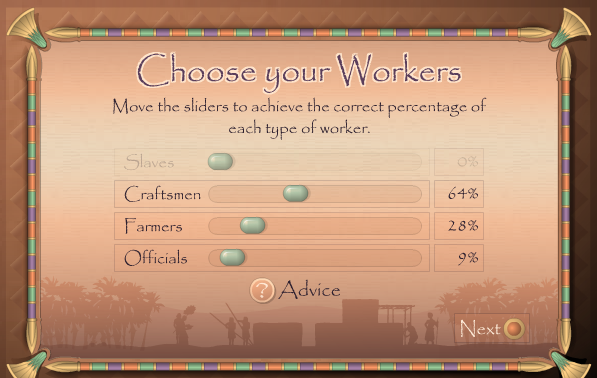 This is a fantastic resource that allows your children to consider all the things needed to create the pyramids. It explores angles, percentages and other aspects of construction, manpower, incentives and feeding staff.

Children are encouraged to think everything through before building the pyramids. A real thinking activity for your class. 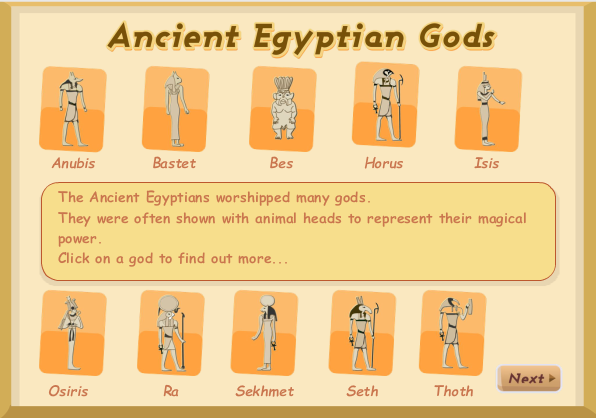 Allow your children to learn all about the Ancient Egyptian Gods by clicking on the image. 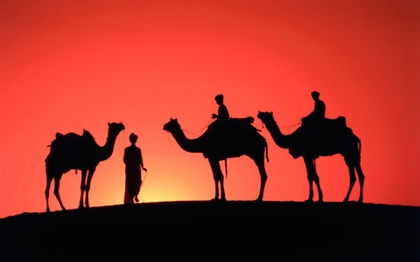 This image shows you a simple piece of artwork that can be created when learning about the Egyptians. Create silhouettes using card of camels, masks, pyramids, Valley of Kings etc. and paint a sunset background. 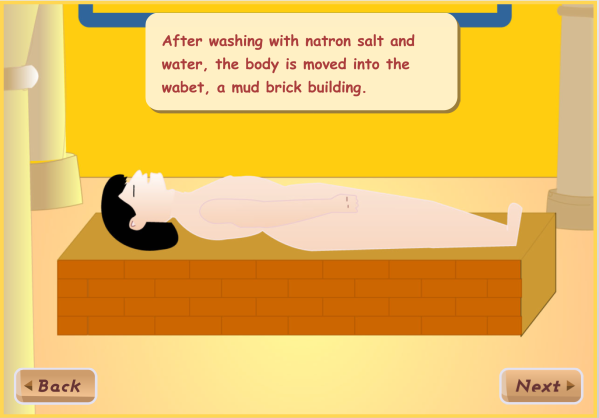 This resource explores the process of making a mummy.

The children will love this game as they can get to take out the organs and place them into the canonic jars and much more! 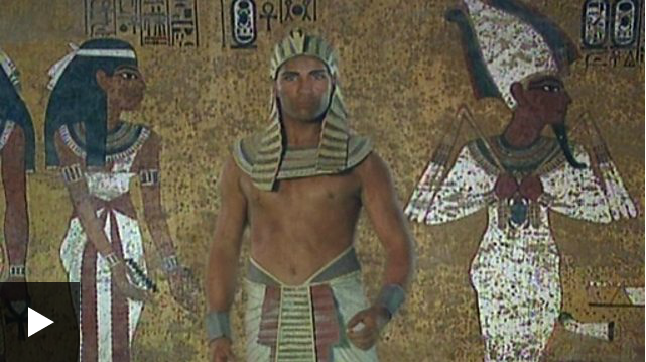 This is a video resource of a wall painting of Tutankhamen that comes to life to tell us about his ruling of Egypt. Despite ruling for a short time, he believes that he was a lucky king because he has all his treasures to take with him into the afterlife. 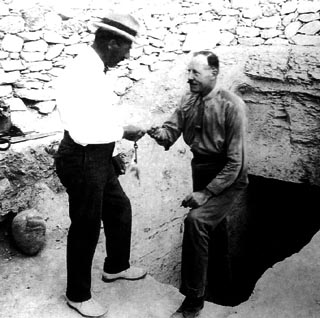 In 1891 a young Englishman named Howard Carter arrived in Egypt. Over the years he became convinced that there was at least one undiscovered tomb. That of the almost unknown King Tutankhamen.

To gain a much more in-depth understanding of Howard Carter and his discovery, click the image. 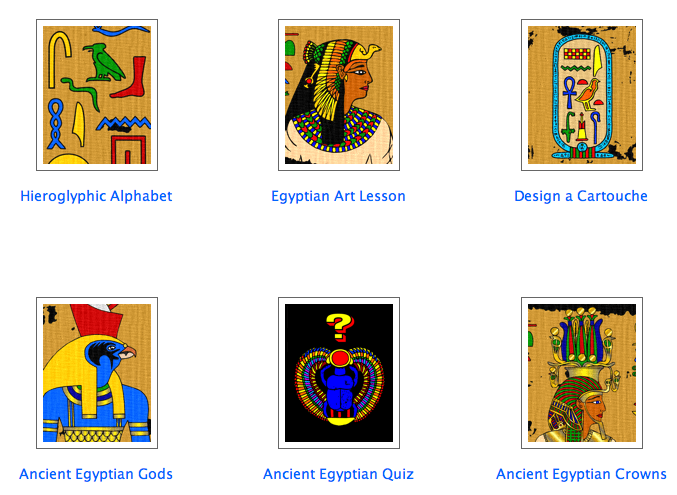 This is a fantastic bank of art resources to support learning about Ancient Egypt. You must inform your class that pictures, pottery, coins etc. held valuable information about civilisations of years gone by to write our history books.

By using this resource your class can learn about the Ancient Egyptians through art activities. 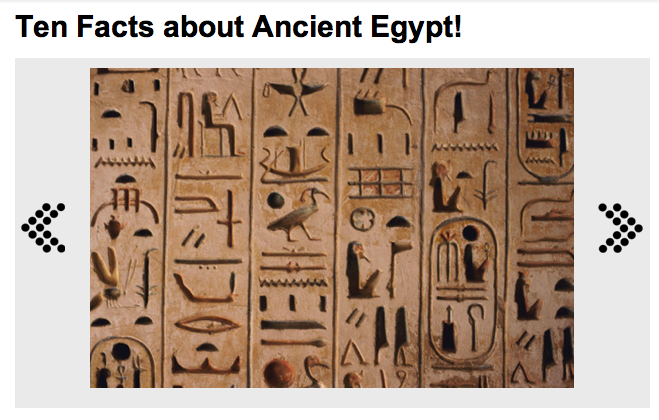 This a a resource to allow the children to take ownership of their learning about Ancient Egypt and report back to the class. 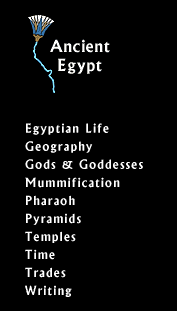 This resource is fantastic when learning about Ancient Egypt. The site is broken down into sub categories to gain particular knowledge. There are facts, stories and images – everything to support accurate and relevant learning. 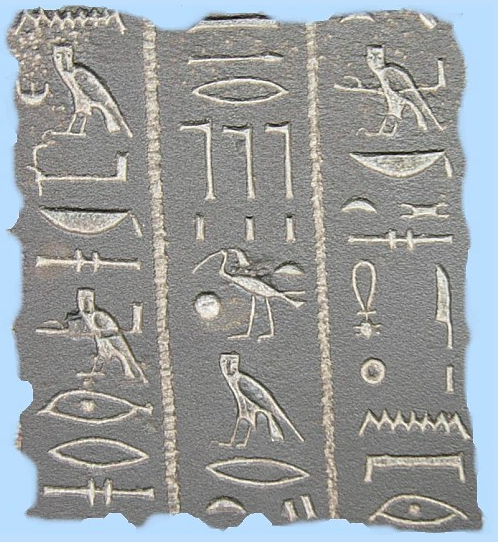 Hieroglyphics uses small pictures which represent the sound of the object or an idea associated with the object.

To find out much more about Hieroglyphics click the image. 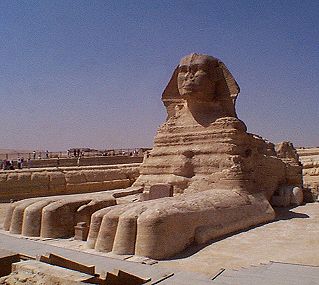 The body of a lion with the head of a king or god, the sphinx has come to symbolize strength and wisdom. To learn more about the Sphinx of Giza click the image. 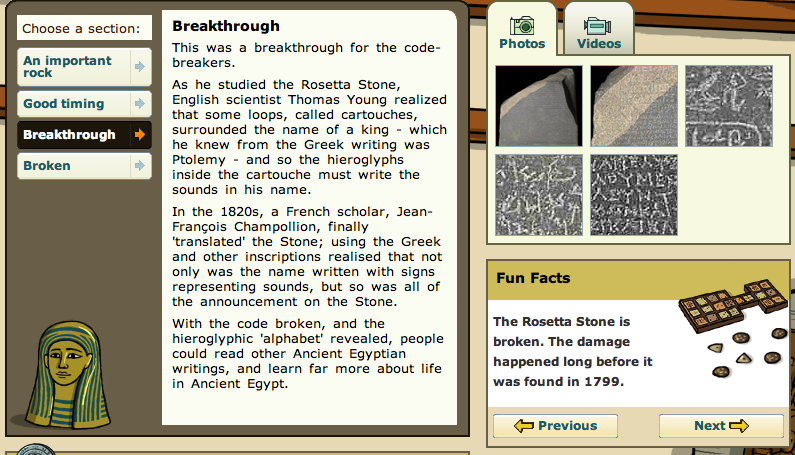 Just a block of stone. Yet on it lay the clue to breaking a code that baffled scholars for centuries: Egyptian hieroglyphs.

Click the image to access images, videos and other learning resources linked to the Rosetta Stone and Ancient Egypt.